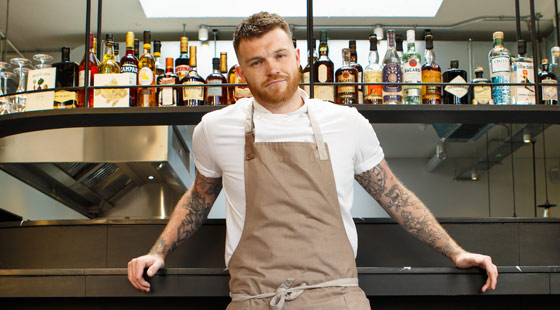 THIS EVENT HAS SOLD OUT

The kitchen is at the centre of the restaurant, with a counter bar seating 11. Key features include a 5,000-year-old, 10-seater oak table, salvaged from a river in Croatia, and a lounge area.

Brown, who until recently was head chef at the Capital hotel in London’s Knightsbridge, said: “I am thrilled to finally be opening Cornerstone. It feels like it has been in the pipeline for such a long time now so being able to announce an opening date is very exciting. Watching the transition of the restaurant from design to actually being built is an incredible feeling.”

Cornish distillery the Wrecking Coast has created a bespoke gin for the restaurant’s signature gin and tonic, with citrus tones to pair with seafood. It is distilled with cloudy apple juice from Polgoon Orchard in Cornwall rather than water. Originally from Cornwall, Brown worked for chef Nathan Outlaw for six years, starting at Outlaws at the St Enodoc hotel in Rock, Cornwall, before later moving to the Capital hotel in 2016, where he won a Michelin star.

We are honoured to be able to host an evening with Tom and look forward to welcoming him to The Boat Inn.

Chef’s Table… is an exciting opportunity for you to enjoy a VIP experience at our pop-up restaurant. Seated just off the pass, you’ll be in amongst the action and receive personal attention from our chefs. Spaces for this are obviously limited for each of our evenings.

The menu… Some Supper Club Members prefer not to see the menu before the evening, however if you would prefer to see it please email beth@saucesupperclub.co.uk for a copy – this is usually available 2 weeks prior to the event!